This is a new adventure. Several weeks ago (March 19 when the west tower crane was coming down), I met several of the Morrow Equipment and Allstate Crane guys. As with all the other folks I have met, they were extremely friendly. What caught my imagination and curiosity was the self-assembly and self-disassembly of the tower - what was the mechanism? I have now had 3 lectures about the climbing unit and how it works - and slowly, I am getting it. I am trying to get photos of the essential elements and using information provided by Morrow Equipment (Charlotte), Allstate Crane Rentals (Goose Creek) and others, in order to tell the story.

The essential player in the self-assembly disassembly process is the climbing unit (shown below) that includes an hydraulic jack for raising and lowering the tower. The tower cranes are Liebherr 420 EC-H 16 Hammerhead tower cranes and are described in Cranes Magazine. In addition to the climbing unit (with a self contained hydraulic jack) are collars and struts for attaching the tower to the bridge pylons. 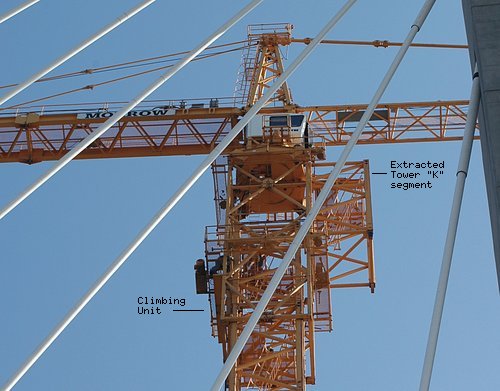 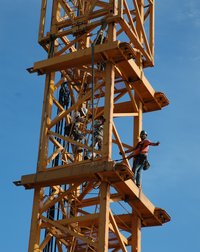 Here you can clearly see the climbing unit's hydraulic jack as well as the cafe-within-the-big-blue-lunch box. 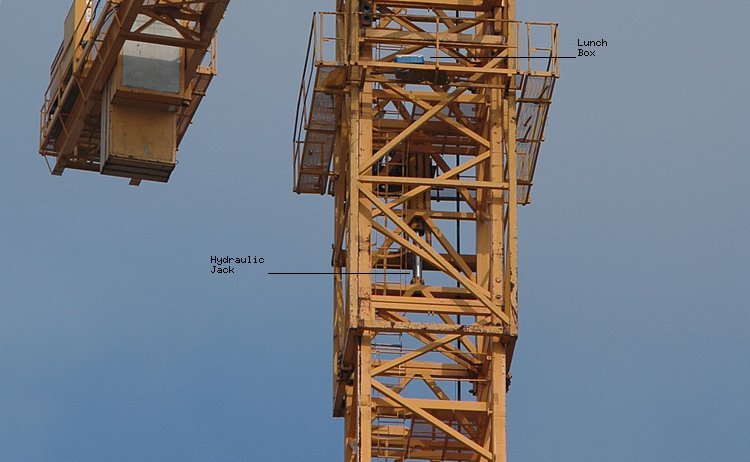 PBC rented two tower cranes from Morrow that have a jib (boom) length of 180 feet. Each tower segment is 19' 8" in height - call it 20'. There are 30 segments for each tower or each tower is 600' tall. The tower is stabilized by attachment to tie-in struts that couple four collars that wrap around the tower with connection plates mounted on the surface of each pylon(see below). The lifting capacity of the tower crane depends on where the hook is located on the boom and the weight of the counter weights. Close to the tower (33 feet) the lifting capacity is about 35,000 pounds while at the tip (180 feet) the lifting capacity is about 16,000 pounds. 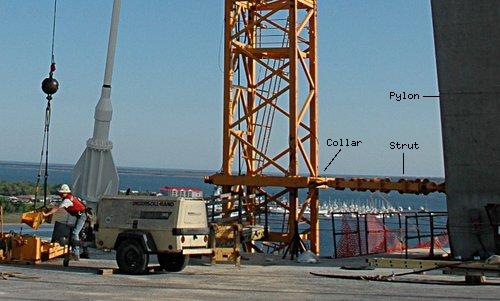 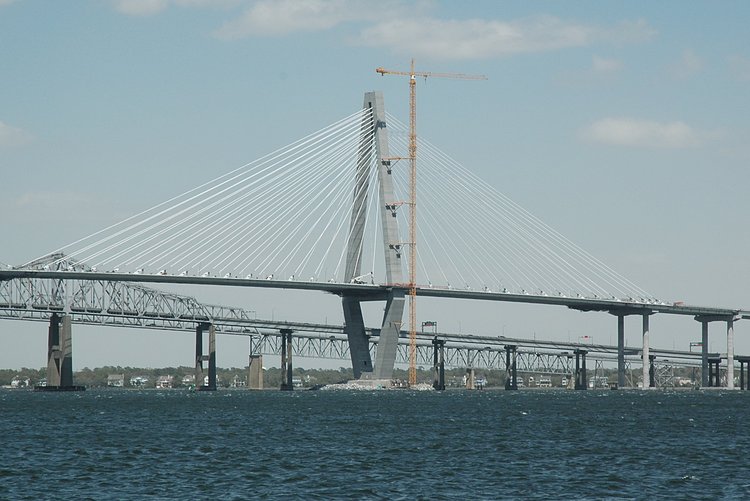 April 8, 2005
Two lateral braces gone and growing down a bit. 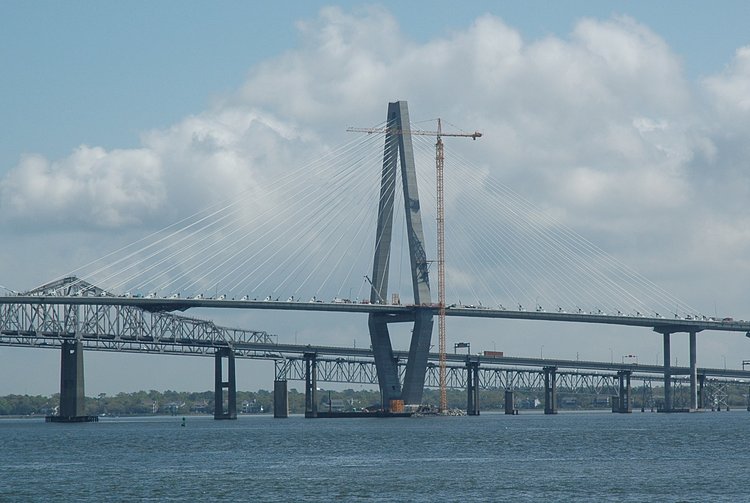 April 9, 2005
Another lateral brace gone and slowly slowly growing down a bit more. Its almost all over for the east tower crane. 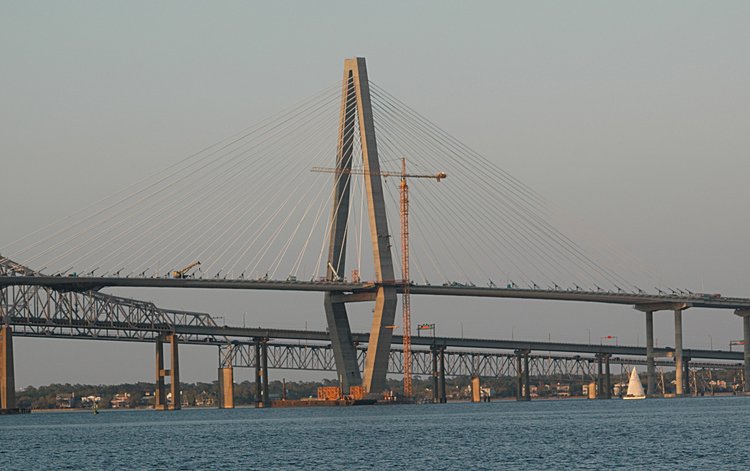 April 14, 2005
Its almost all over for the east tower crane. A section of the jib is resting on the main deck. Everthing else is either on the barge or sleeping on a truck. 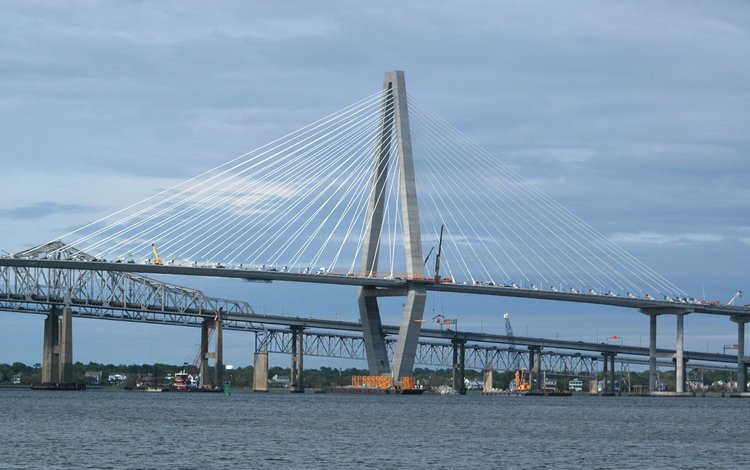 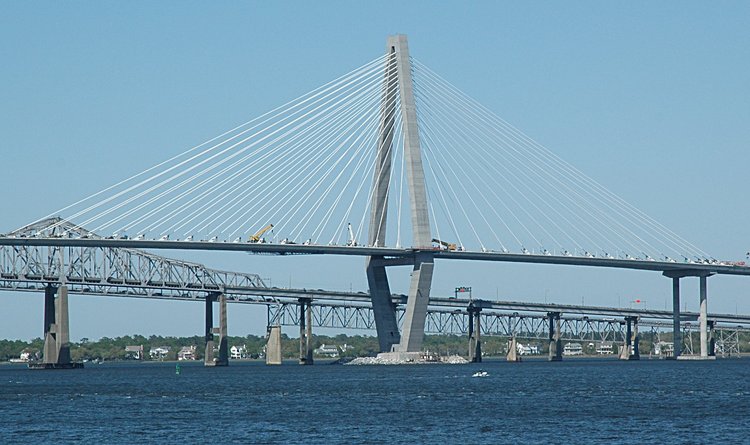 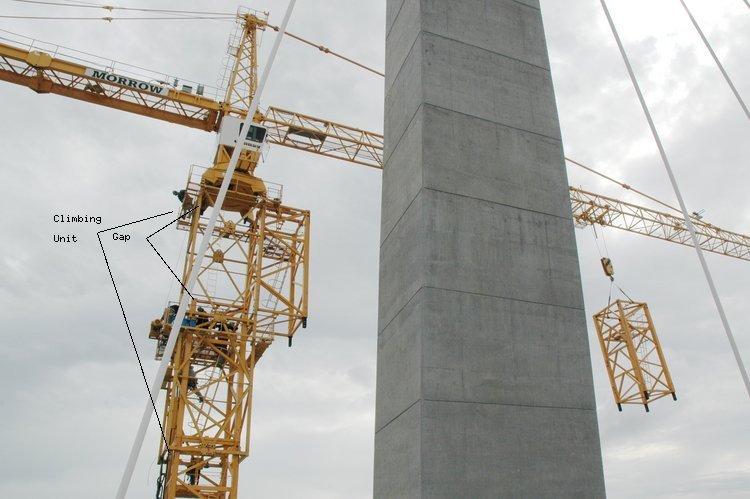 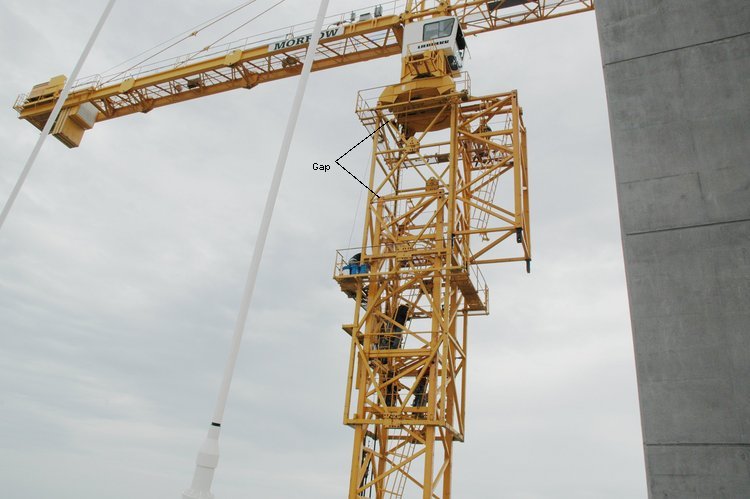 Now the top of the lower segment is about 6 feet below the turrett. 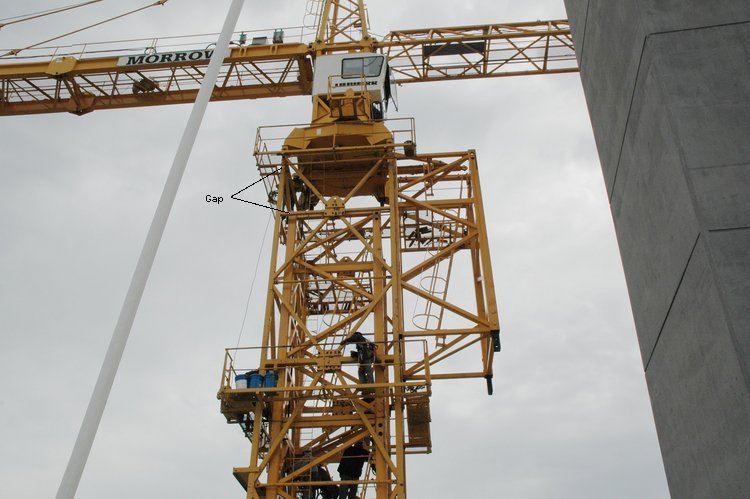 And finally, the climing unit has finished this cycle. 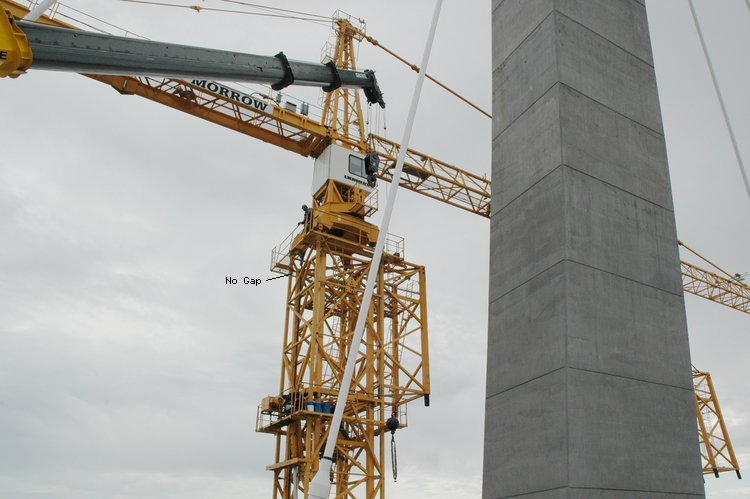 The jack assembly that does all the work. This is a real engineering marvel. The jack assembly has 4 essential parts as I understand what is happening. There is the hydraulic cylinder, an upper and lower foot and a pivot that allows the hydraulic cylinder and lower foot to swing out. To lower (or raise) the climbing unit, the lower foot is positioned on one of the horizontal members of a tower segment. Hydraulic fluid is removed from the cylinder, thus lowering the climbing unit. This continues until the upper foot rests behind the lower foot. A little more lowering then frees the lower foot which can be pushed away from the tower and then repositioned on the next lower horizontal member of a tower segment. Each descending episode is about 5 feet - and 4 episodes = 20 feet, the height of a tower segment. Note the alignment of the upper foot with the horizontal brace on the inner tower segment as the next lowering-cycle starts. 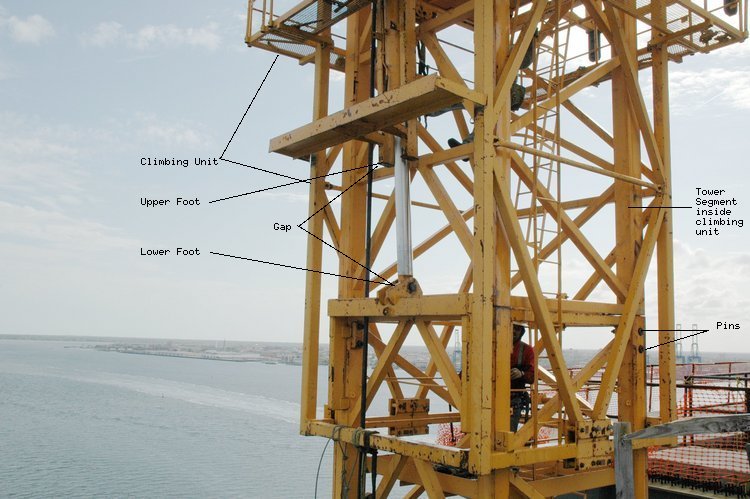 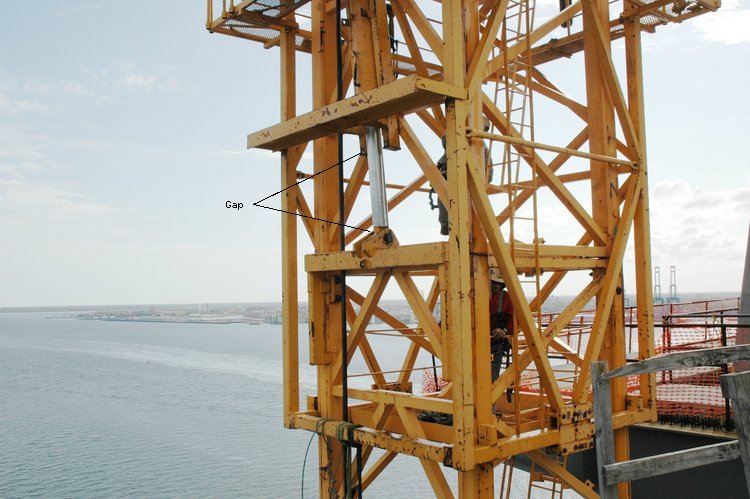 A closer view of the movement of the upper foot. (I know, the colors are slighly off - the result of thinking I switched the white balance to automatic but in fact, managed to set it for indoor incandescent lamps. So I tried to reverse the color balance - just need a bit more practice. If you would like to try your hand Click to download the original.)

And here, after a little more descending action, the upper foot is almost in position to transfer support from the hydraulic jack foot (lower) to the upper foot. 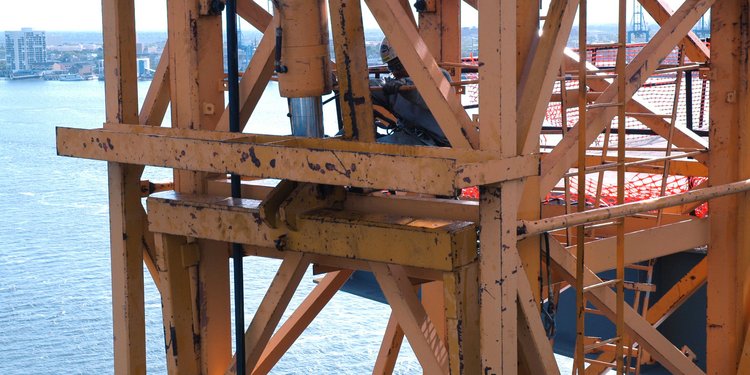 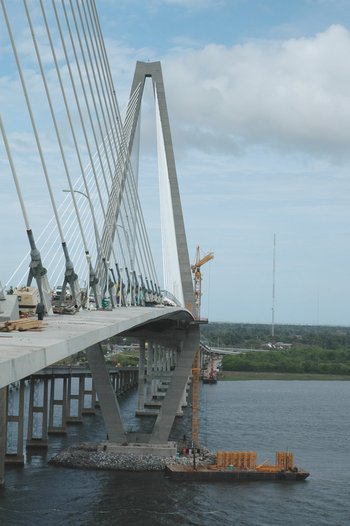 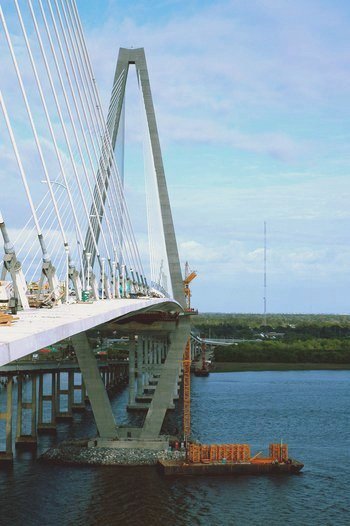 April 6, 2005:
The East Tower Crane, growing down. Here, a K section is hanging from the jib and waiting to be lowered to a barge waiting on the river below 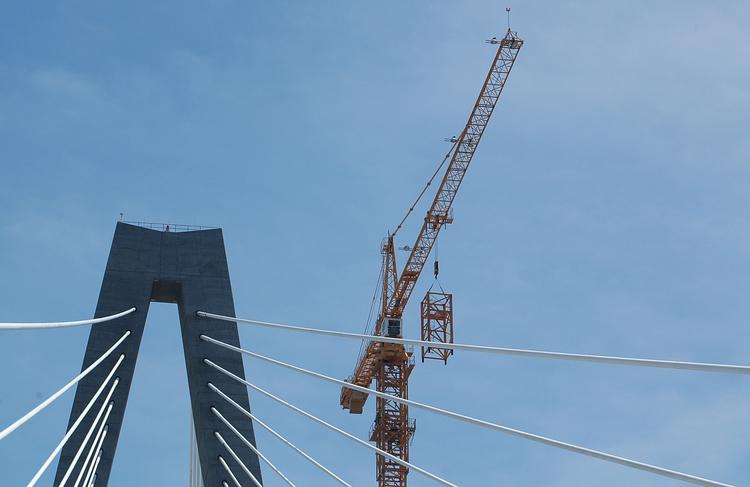 April 6, 2005:The East Tower Crane is growing down
If you look carefully (click on the image) you can see 1 tower segment resting on the main span deck and 2 tower segments resting on a barge at the foot of the tower. In addition, the upper strut assembly, connecting the tower crane with the concrete pylon, has been removed. 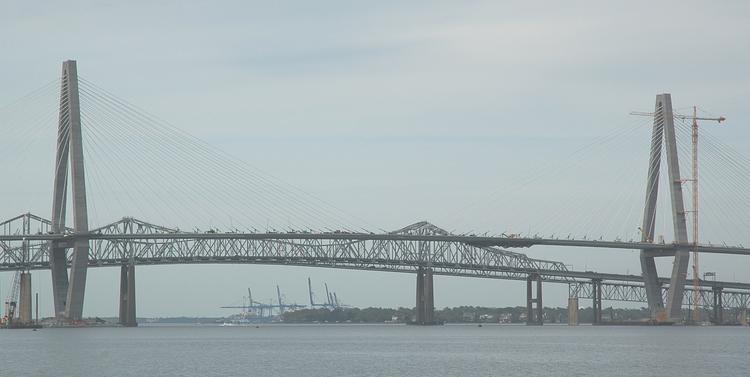 April 15, 2005:Bridging the Channel Gap
Gone is the east crane, the barge and everything